In the third Artist Interview Project installment, we’ll highlight another Oregon-based artist. In this interview, you’ll read about Meredith Durham, the artist behind Maybe Sew Maybe Knot.  The first part of this entry includes the full text from the interview. It is followed by a student’s reflective analysis.

What thoughts and emotions are you portraying through your work?

I think that I am going to have to go with witty humor. I definitely want someone to look at one of my pieces and chuckle to themselves. It started because I wanted to make a custom piece for a friend and decided to make one that said “Damn it feels good to be a gangster” with a big rainbow behind it. I want my pieces to make people happy and I love it when I get a kick out of something as I’m making it. I kind of have to like what I am making because I’m going to be staring at it for a WHILE and if it’s a song, it’s definitely going to be stuck in my head. Some of the music themed stuff isn’t as focused on humor, but I think the bands that inspire me have that element to their work- that’s part of why I dig it so much. Phish certainly contains the intelligent humor that I love so much. I also like inside jokes, only stuff that a real fan will get.

What makes your art beautiful? What makes cross-stitching different from painting or composing in this quality? Oh let me count the ways…… I love cross stitch because of the way that you plan for it. It’s like figuring out a math problem. It is so crucial that you line up everything just right. It is very difficult to fix a mistake without undoing A LOT of work. I plan my pieces by coloring on graph paper. I get great satisfaction from sketching something out on paper and then watching it take shape through a very time consuming and tedious process on a tiny scale. I don’t know why I like that so much, but I do! It makes me feel like I’m painting on a pin head sometimes. SO much tiny detail and then you step back and –boom! There’s your image. I think I also like the imagery because it has the 8 bit feel of the video games I played as a kid. I’m not super into video games, but as a kid born in 1982, Nintendo is definitely a cultural touchstone.

What target demographic are you shooting for in your work? Is it mainly for business or more of a hobby? I make things that I like, because the odds are, someone else is going to like it too. I don’t do it to support myself, but I definitely use it as a means to pay for my travels to see the bands I love! I do think of the people I’m selling to, but those people are usually a lot like myself. I give them as gifts a lot too. It’s very old school to give someone a “cross stitch sampler” as a wedding gift. It’s very time consuming, so if I give you a cross stitch, you are loved by me!   I’ve also started making mason jar lids- much like the ones my grandmother and other ladies in the south would make when they handed out their jam and pickles as gifts. I like the unexpected- like seeing a Phish or Grateful Dead reference on an old-school medium.   I support myself as a real estate broker.

What is your role within the Phish community as an artist? What makes you so connected to this community? Oh man, how I love this community. I have read about and dreamed of following The Grateful Dead since I was in middle school. I wasn’t able to make that happen since Jerry died when I was 12. I thought I might not be able to make it happen at all, but in 2012 I found myself in a job a really didn’t like and I had no real ties, so I quit my job and followed the Phish for the 2013 Summer Tour- Maine to Denver. I hit New Year’s in 2012 and 2013 as well. I saw 29 shows that year (one short of my goal), their 30th year as well as my 30th year on this earth. I had so many obstacles- my timing belt broke in Indiana on the way to Chicago (still made it to the show on time!). I had to get a new engine- I digress- but the point is: I had so much help! That night, I had friends to stay with in Chicago, and people in Indianapolis were offering their couch to me. I have friends in almost every major city around this country thanks to the kindness and generosity of the fan base. What a stellar crew. I know people like to talk about how rowdy and destructive Phish fans are– there is that element everywhere with any large group of people—but I have always been overwhelmed by the sheer awesomeness of all of us.

Do you ever get requests for pieces of art that you don’t really care to make? Does passion make one of your works better than others? Why do you think so or not? The only thing I had a request for that I wasn’t super stoked on was one that had a quote from a book. It had the word “goddamn” in it, and I thought, “if my mom saw me stitching this, she would kill me!” but that was a custom piece, so I made it for the friend that asked for it. I usually really dig the custom requests because it allows me to figure out ways to design something that I would have never thought of myself. I just finished a piece for my friend’s dad with a wizard on it- I love the way it turned out and he was so pleased he sent me more money than I had quoted him. Customer requests definitely help me expand my creativity.

What is art? Leo Tolstoy pondered this question back in the 19th century. What is its function and how does it serve humanity? According to Tolstoy, the function of art is its ability to create a shared emotion between the author and audience, specifically joy. Meredith Durham, proprietor of Maybe Sew Maybe Knot, has felt a connection with the Phish community ever since the 2013 summer tour. Her art is influenced by this band and other esoteric references. The purpose of Meredith’s art is to bring joy to someone’s day. Due to the long process of cross-stitching, when Meredith presents her work as a gift it expresses her connection to the recipient.

Meredith explains how she worked a job she didn’t enjoy until 2012, so she joined the Phish 2013 summer tour. This experience changed her life. Despite many obstacles, she received significant support from the Phish community. There is no doubt that the 2013 Phish summer tour influenced her art.

While we did not specifically discuss the live shows, it is clear that Phish concerts create a special space for Meredith and other phans. In his essay, “Affect and Embodied Understanding in Musical Experience,” D. Robert Dechaine describes two types of musical space. The first is the physical space of the concert, or the “space of music as it is bounded in the site of the music” (p. 92). The second space, musical “play” takes place in the fourth dimension and is “articulated across places, bodies, thoughts, and feelings.” Meredith’s art embodies the playful nature of Phish’s music.

Meredith’s response to my first question hints at a phenomenon that Dechaine terms policing. She stated, “I also like inside jokes, only stuff that a real fan will get.” Policing, for Dechaine, is “guarding the space from ‘the undeserving,’” as if only true fans are to be counted as part of the community (p. 95). Guarding musical space is a way of creating community; there are some things such as inside jokes and esoteric knowledge shared by the community that others just won’t understand.

Some people may enjoy Meredith’s work; others will not. Immanuel Kant, in his Critique of Judgment, determines what differentiates between good and bad taste. He writes, “All delight (as is said or thought) is itself sensation (of a pleasure). Consequently everything that pleases, and for the very reason that it pleases, is agreeable” (§3). When someone takes Meredith’s work and gets a good laugh. then her job as an artist is accomplished. Meredith’s work, in my opinion, possesses the capability of being both agreeable and beautiful. The process alone to produce a cross-stitch is beautiful and intricate; the beauty lies in the effort.

When Meredith decided to attend the 2013 Phish summer tour, she indelibly altered the course of her life. Her later cross-stitching has been influenced by the band Phish and other esoteric cultural references that some may or may not understand. The beauty of Meredith’s work lies in the connection between the artist, art, and joy it brings to her audience. 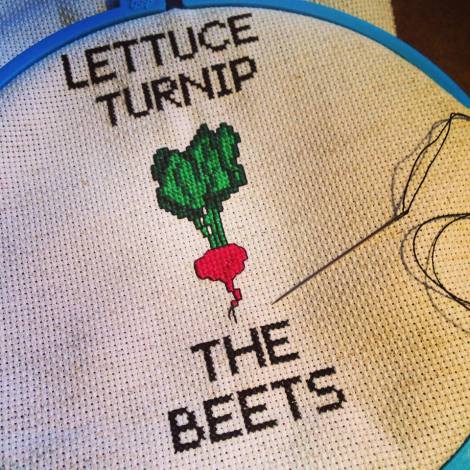 With over 110,000 members CashorTrade.org is changing the ticket industry. Join the movement for face value tickets and avoid the scalpers!
This site voluntarily complies with the Phish fan web site policy .
Loading Comments...
%d bloggers like this: