The next Artist Interview Project installment features Mark Filoramo, the director of Contact: The Quest for the Black Circle. The first part of this post includes a student’s reflective summary. It is followed by the interview transcript.

Find more information about Mark’s work, visit his Youtube channel and Twitter (@mark_filoramo). You can also listen to a Phemale-Centrics podcast interview (episode six) about his project. 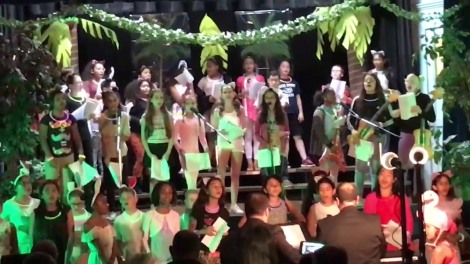 Mark Filoramo is a music teacher at Ross Street Elementary School in Woodbridge, New Jersey. Earlier this year, he wrote and directed a musical that uses the music of Phish. In this interview, Mr. Filoramo talks about his love for teaching, music, and, of course, Phish.

Mr. Filoramo spoke a lot about the Phish crowd. Being a fellow concert-goer, I understood why he seemed to see his co-Phishers as integral to his experience of Phish. It reminded me of when guitarist Trey Anastasio talks about a “gasp” moment in an interview with Charlie Rose. Experiencing something as part of a community is fundamentally different than experiencing it as an individual. In his essay “The Everyday Miracle of the Occasional Community,” John Drabinski also notes this idea: “There is…an authentic transformation of who you were before you walked into the parking lot into who you would be for the show. Not a put on. A genuine transformation” (35). The communal aspect transforms you, adds another aspect to your persona. You aren’t just yourself; you are a functioning part of something bigger.

I also was reminded of Nietzsche’s writings about “Dionysian” experiences. In Ecce Homo he states that “saying Yes to opposition and war; becoming, along with a radical repudiation of the very concept of being-all this is clearly more closely related to [Dionysian thought] than anything else to date” (48). Mr. Filoramo noted that although he enjoyed the original Phish songs, he did not show them to his students. I thought this was really interesting. The Dionysian aspect of the music, which is the aspect of the music which makes its listeners feel something, lies largely in how it is performed. It makes sense then that Filoramo would not want his kids to try and recreate the performative aspect of Phish’s music as it was, because those recordings are memorials to the actual moment of performance.

Mr. Filoramo created something incredibly special. He took Phish– music that is constantly evolving and changing– and applied it to something completely different. In the process, he created an entirely new work of art. As Jnan Blau states in his essay, “A Phan on Phish: Live Improvised Music in Five Performative Commitments,” “Risk’s efficacy [is]: the potential for positive achievement…and the potential for negative achievement.” The risk of this endeavor, as I see it, was that the musical very well could have gone in the other direction. After all, kids are difficult creatures to pin down! If they aren’t fans of something, they don’t usually hesitate to make that known. Filoramo showed a lot of trust placing music which he was so passionate about into the hands of those kids. That risk really paid off. You can tell those kids put their hearts into the music when you watch them perform, and that is a sacred thing.

I’m honored I had the opportunity to speak with Mr. Filoramo. To me, he embodies what a mindful Phish fan does, which is bring the positive, productive energy of Phish beyond the concert venues.

[The following is the student’s transcription from notes of a phone interview.]

Mr. Filoramo! It’s so nice to meet you. Would you mind explaining how you ended up at your current job?

Yeah, I actually started out in music performance. But pretty early on I learned that performance is a hard path to take. So I got a job at a Catholic school as a music teacher and worked on getting my teaching licensure. So I kind of took an alternate route to certification. After that I ended up taking a job at a special ed school and stayed there for nine years. And I’ve been at my current job for about ten and a half years now!

I would say the biggest struggle teaching special education kids is being well-planned and flexible. There are a couple great apps on the iPad that I use now with my kids. I wish I had those before because kids really latch on to that. But you have to know what you want to get accomplished and also realize it will probably not happen!

Switching gears- let’s talk about Phish. What draws you to Phish?

I like the positive vibe of Phish. That’s one of the things that drew me in. I also like the interplay the crowd has with the band. That’s not something I’ve seen at a lot of other concerts.

When was your first concert?

My first show was way back in ’99. I was actually dragged there by my brother-in-law Rich! I didn’t want to go. And it just went from there.

Wow so you’ve been a fan for almost twenty years! How many shows have you seen?

When you were introducing Phish to your students, did you show them any original songs?

No. I didn’t show them the original Phish songs. I wanted them to make the musical their own. I was worried the originals would confuse them. And kids like singing more than listening.

Very understandable. How many different songs did you end up using in the musical?

So there were thirteen songs, and these are elementary students. It was a big undertaking, but they did great with it.

How did you put the musical together? Did the songs come first, or did the story?

What’s your personal favorite moment of the musical?

I really like the climax of the show. The song I chose was “Contact,” and this song kind of inspired the musical because my daughter sang “Contact” at a coffee house.

How old is your daughter? Has she gone to shows with you?

She is fifteen! I haven’t brought her to a show yet but I might bring her this summer. We’ll see. I’ve brought my son a few times. He is older.

Returning to the musical, how did your kids receive the Phish songs?

The students really enjoyed it! They thought it was funny. There is actually a Phemale-Centrics podcast interview where they interviewed the kids about what they thought about [the play].

You mentioned before this that you are married. Is your wife also a Phish fan?

Yes, she is a fan! She makes Phish pottery and sells it at shakedown.

Since you’ve been a fan for a while, do you have any opinions on the different phases of Phish?

I think the crowd changed after the first breakup. And it was for the better.

There is something special about Phish’s music. What do you think that special thing is?

Improv is where it comes alive. I mean, Trey studied composition in his undergrad so the composition is solid. When they’re live they add improv and energy and it creates a vibe. They’re constantly creating and feeding off of what they’re creating.

The energy is just unexplainable. There are elements of life that are just different there. It’s a circus!

With over 110,000 members CashorTrade.org is changing the ticket industry. Join the movement for face value tickets and avoid the scalpers!
This site voluntarily complies with the Phish fan web site policy .
%d bloggers like this: